FR. JAMES C. GRIFFIN – Fr. Jim – was born in New London, CT and is the oldest of 9 children. He has four sisters (one deceased) and four brothers.

His father was a Naval Academy graduate (1947), and commanded the USS THREADFIN (SS 410) IN Key West, Fla. His mother was the former Anne Christine Russillo, whose father was an Admiral in the Navy (and also a submariner, USNA ‘27).

Fr. Jim graduated in 1977 with a Major in Communications/Theatre from Saint Vincent College (Latrobe, Pa.), entered the monastery there and after two years as a Benedictine monk - joined his home Diocese of Richmond as a seminarian. He studied at Theological College in Washington DC (part of Catholic University of America), was ordained a transitional Deacon on June 6, 1981 at Immaculate Conception Church in Hampton and a priest on May 8, 1982 as part of a class of nine priests.

Fr. Jim has been active in prison Ministry (for 20 years as a Chaplain on Death Row) and other institutions, and active supporter of Diocesan Haiti ministries since 1988.

Fr. Jim loves baseball (has been a season ticket holder for the Norfolk Tides for over 30 years), and travelling. 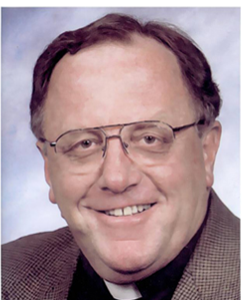