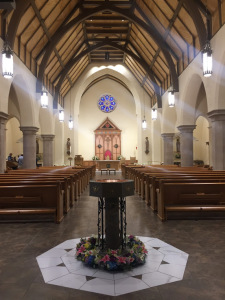 Statement of U.S. Bishops’ President on George Floyd and the Protests in American Cities

WASHINGTON – Archbishop José H. Gomez of Los Angeles and president of the U.S. Conference of Catholic Bishops (USCCB) has issued a statement on George Floyd and the protests in American cities that have taken place over the last several days.

The killing of George Floyd was senseless and brutal, a sin that cries out to heaven for justice.  How is it possible that in America, a black man’s life can be taken from him while calls for help are not answered, and his killing is recorded as it happens?

I am praying for George Floyd and his loved ones, and on behalf of my brother bishops, I share the outrage of the black community and those who stand with them in Minneapolis, Los Angeles, and across the country.  The cruelty and violence he suffered does not reflect on the majority of good men and women in law enforcement, who carry out their duties with honor.  We know that.  And we trust that civil authorities will investigate his killing carefully and make sure those responsible are held accountable.

We should all understand that the protests we are seeing in our cities reflect the justified frustration and anger of millions of our brothers and sisters who even today experience humiliation, indignity, and unequal opportunity only because of their race or the color of their skin.  It should not be this way in America.  Racism has been tolerated for far too long in our way of life.

It is true what Rev. Martin Luther King, Jr. said, that riots are the language of the unheard.  We should be doing a lot of listening right now.  This time, we should not fail to hear what people are saying through their pain.  We need to finally root out the racial injustice that still infects too many areas of American society.

But the violence of recent nights is self-destructive and self-defeating.  Nothing is gained by violence and so much is lost.  Let us keep our eyes on the prize of true and lasting change.

Legitimate protests should not be exploited by persons who have different values and agendas.  Burning and looting communities, ruining the livelihoods of our neighbors, does not advance the cause of racial equality and human dignity.

We should not let it be said that George Floyd died for no reason.  We should honor the sacrifice of his life by removing racism and hate from our hearts and renewing our commitment to fulfill our nation’s sacred promise — to be a beloved community of life, liberty, and equality for all.

Bishop Knestout encourages anyone aware of sexual abuse of minors on the part of clergy or staff of our diocese to notify civil authorities, call the Attorney General's Clergy Hotline at 1-833-454-9064, and reach out to the DIocesan Victim Assistance Coordinator, Jennifer Sloan at 1-877-887-9603.

Encounter The Joy of the Gospel

Register in Our Parish

Bicentennial of the Diocese of Richmond

Diocesan Response to Present Crisis in the Church