Deacon John T. Tucker, III is a native of Richmond and, as an infant, was baptized at St. Paul’s Catholic Church. He is the third child of John T. Tucker, Jr. and Martha Bucher Tucker. John is married to the former Lynn Murphy. They have two grown children – J.T. and Michael.

John received a B.S. in Education from the University of Virginia in 1981, a J.D. from the University of Richmond in 1985, and a M.A. in Theology from St. Leo University in 2012. He was ordained a permanent deacon by Bishop Francis X. DiLorenzo on November 3, 2012, and has served at St. Paul’s since that time. John coordinates the Confirmation and high school religious education programs, is an advisor to the Youth Group, is a member of the Men’s Group, and plays (if you can call it that) on the church softball team.

John was the Chief Staff Attorney of the Court of Appeals of Virginia from 1990 until his retirement in 2018. He has also served as an Adjunct Professor at the University of Richmond Law School, the William & Mary School of Law, and the Appalachian School of Law.

John is the Co-Executive Director of The National Association of Appellate Court Attorneys. He serves on the Boards of All Saints Catholic School, The Parsons' Cause Foundation and The Nora Houston foundation. In addition, he performs in the "Liberty or Death" reenactments at The Historic St. John's church in Richmond's Church Hill. 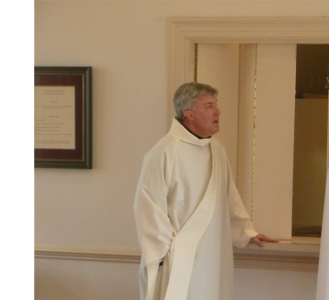